Cathy Lanier spent her entire law enforcement career with the Metropolitan Police Department, beginning in 1990. Much of her career was in uniformed patrol, where she served as Commander of the Fourth District, one of the largest and most diverse residential patrol districts in the city. She also served as the Commanding Officer of the Department’s Major Narcotics Branch and Vehicular Homicide Units.

In 2006, the MPD’s Office of Homeland Security and Counter-Terrorism (OHSCT) was created, and Chief Lanier was tapped to be its first Commanding Officer. A highly respected professional in the areas of homeland security and community policing, she took the lead role in developing and implementing coordinated counter-terrorism strategies for all units within the MPD and launched Operation TIPP (Terrorist Incident Prevention Program).

After assuming leadership of the Metropolitan Police Department on January 2, 2007, Cathy L. Lanier was unanimously confirmed as the Chief of Police by the Council of the District of Columbia on April 3, 2007. She retired from the Metropoilitan Police Department in September 2016, and now serves as Senior Vice President, Chief Security Officer at the National Football League.

Chief Lanier is a graduate of the FBI National Academy and the federal Drug Enforcement Administration’s Drug Unit Commanders Academy. She holds Bachelor’s and Master’s Degrees in Management from Johns Hopkins University, and a Master’s Degree in National Security Studies from the Naval Postgraduate School in Monterey, California. She is certified at the technician level in Hazardous Materials Operations. 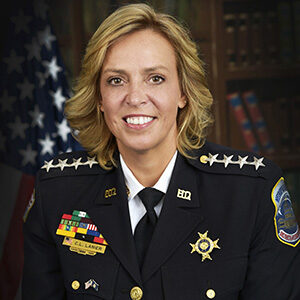